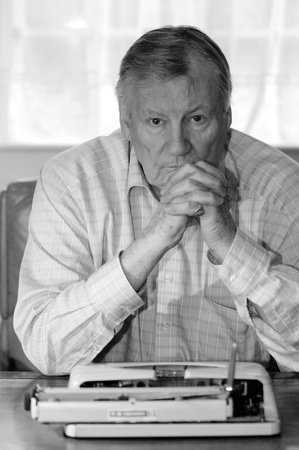 Jack Higgins lives on Jersey in the Channel Islands. The author of dozens of bestsellers, most famously The Eagle Has Landed, he served three years with the Royal Horse Guards in Eastern Europe during the Cold War, and subsequently was a circus roustabout, a factory worker, a truck driver, and a laborer before entering college at age 27. He holds degrees in sociology, social psychology, and economics, and a doctorate in media. A fellow of the Royal Society of Arts, he is an expert scuba diver and marksman.

Rain on the Dead

A Devil is Waiting

The Wolf at the Door

Why did you write a book for young adults and what interests you about this audience?

Jack Higgins: The astonishing thing about young adults is their ability to cope with literature at the highest level. I gave my 9-year-old granddaughter a copy of A Christmas Carol and she devoured it and loved it.

Justin Richards: I write mainly for children. There are lots of reasons for that. One is that when my older son, Julian, was about 9 years old he was a very good reader, but it was difficult to find books that were challenging enough yet still appropriate to and interesting for his age group. Partly because of that I started writing The Invisible Detective.

I think writing for children is more liberating and also challenging to a writer – writing for older children in particular. They are much more discerning than adults in many ways. They don’t let you get away with anything. Today, a child’s attention span is much shorter so there’s a challenge there to grip and hold their attention. I think there’s more leeway in children’s and young adults’ literature. You can write the most fantastical stuff and its not pushed away into some niche or seen as being some minority genre. For instance, I think if Philip Pullman’s Dark Materials Trilogy had been published explicitly for adults they’d have been badged and sold as science fiction / fantasy and wouldn’t have had the impact – people would not have found them, let alone realized how they use the fantastical, other-world elements to talk about ourselves here and now and how the real world works. Or doesn’t.

Which of Rich’s characteristics would you most like to have and why? What about Jade?

Jack Higgins: Rich gives a false impression of the kind of person he is. He’s quite capable of handling the rough stuff, danger and so on. And that’s good because it fools the bad guys. Jade has taken over to a remarkable degree. She’s quite simply a female James Bond.

Justin Richards: Rich is quite analytical. He has a knack of seeing the wood despite the trees – of understanding what’s really important in a situation, even under pressure. I like that. He may be frightened, or out of his depth, but he’s still able to make decisions and get going to do what he believes is the best thing. Jade is rather more emotional. But because she has no qualms about speaking her mind, you know where you are with her. There’s an honesty there which I admire. She doesn’t take to people immediately – they have to win her trust. But once they do, she’s going to stick by them. And heaven help anyone who betrays her!

Are there any parts of Sure Fire that are based on current events?

Jack Higgins: Yes. Problems with all kinds of fuel, oil and gas are to a certain extent creating a cold war with Russia again.

Justin Richards: Despite what I said about having a license to tell the most fantastical stories, Sure Fire is anchored very much in the real world. Krejikistan may not be a real place, but the sorts of things happening there – in both politics and the economy, the way the crime lords are taking over, the dependence on Russia for fuel… All that is going on in various places in eastern Europe. We’ve brought several of those situations together and increased the pressure as a result. But everything that happens could be for real. As for whether it’s actually based on real events – well, yes. The fuel arguments between the Ukraine and Russia is an obvious ‘source’. But once you get into the murky worlds of espionage and special operations, then the truth is often more bizarre than the fiction. There are things that do happen in the real world – like radioactive assassination, to take a recent example – that we’d never get away with in a book. The readers just wouldn’t believe it could happen!

Justin Richards: Thrillers – from Enid Blyton’s Famous Five on to ‘classic’ thriller writers like Alistair Maclean and – yes, Jack Higgins has always been a favourite author of mine. So working with him is a dream come true. Other modern writers I admire very much, writing for young adults – Philip Pullman, Anthony Horowitz who has given children’s adventure stories such a boost, Stephen Cole, Jonathan Stroud… We are so lucky to live in an age where there are so many good children’s writers and their work is appreciated and respected – and a lot of that is thanks to JK Rowling, another favourite of course…

What advice can you give to aspiring writers?

Jack Higgins: People always say, “write what you know”. This is false information. What you need as a professional writer is the gift of creativity. Most writing is make-believe.

Justin Richards: If you want to write, if you want to improve and learn as a writer, then the two most important and useful things you can do are – read and write. The more you read, the more you will understand how words can be put together, how they work, how to do the job if you like…

And while you definitely need some talent and skill, writing is also a craft. It’s like a sport that you have to train for. The more you do it, the more you practice, the better at it you get. Try to write something every day – even if it’s an email or letter. Keeping a journal is a good idea. The great thing about writing is you can do it for pleasure, just for your own enjoyment. If you want to be published and make it a career, then that takes a lot of hard work as well as talent. And it takes a lot of luck too. So – good luck!