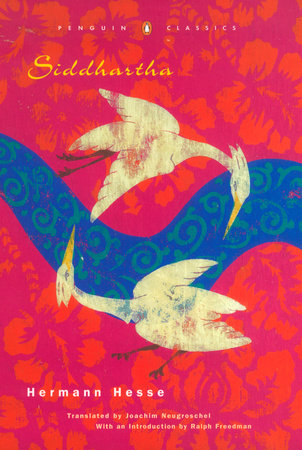 Questions and Topics for Discussion

Hermann Hesse’s short novel Siddhartha has sometimes been called a work of reverse missionary activity, bringing to the West the lessons of a typically Eastern story of spiritual searching and fulfillment. However, this deceptively simple and episodic tale of the title character’s progress through life provides no conventional resolutions to the questions it poses. In emphasizing Siddhartha’s self-assertive individuality, Hesse makes plain that his book is as much a product of Western as well as Eastern intellectual traditions.

The story of the Brahmin’s son who leaves home to seek deep and lasting satisfaction appears to end where it began: beside a river with Siddhartha and Govinda united in friendship. But the first words of the novel are a hint that it will proceed and find its momentum through a series of opposites: “In the shade of the house, in the sunshine near the boats on the riverbank” (p. 3). Immediately, light is contrasted with shade, and the stability of home is contrasted with the vehicles that ply the river’s flow, foreshadowing Siddhartha’s future life with the ferryman Vasudeva. Each of the novel’s twelve chapters, divided into two parts, finds Siddhartha simultaneously facing a crisis and a new beginning in his search.

One of the important questions to consider is whether Siddhartha’s search is driven more by discontent with his current state or by a vision of where he is going. In succession, he rejects the intellectual and ritualistic teachings of his father and the other Brahmins; the self-abnegating rigors of the ascetic samanas; the opportunity to become a disciple of Gautama, the Buddha; the world-weary existence of material success; and even the futile role of protective father to his son. As Siddhartha reflects early on, the stages of his life are like “the old skin that leaves the serpent” (p. 35). The image of the rejuvenated snake sharpens the contrast between his deliberate intentions and the natural course of things through the stages of life. If we believe that Siddhartha achieves progress and not merely a change of circumstances in his lifelong search, it can be asked what part his own will plays in achieving the enlightenment that he finally comes to by the end of the story. To an observer, the scene of Govinda gazing raptly at the face of his old friend beside the river might appear to be simply their reunion after many years of separation. However, we are told that what Govinda sees reminds him of the smile of Gautama, the universally acknowledged “Sublime One,” the Buddha, whose lifelong disciple Govinda had been.

In finally identifying Siddhartha with the Buddha, Hesse suggests that the story he is telling is both more and less than an original work of fiction. It is important to keep in mind that Siddhartha is the given name of the person who came to be known as the Buddha. The early events in the life of the novel’s protagonist closely parallel the traditional story of the Buddha’s life. In the third chapter of the book, the fictional character, Siddhartha, meets Gautama, a portrayal of the historical Buddha and, during their dialogue, rejects the idea of following him as a disciple among all the other disciples, including his friend Govinda. In having Siddhartha set off on his own, Hesse raises searching questions about the nature of the relationship between a teacher and a disciple, about how a teaching that reflects the experience of a teacher can instill that experience in a follower.

This is one of a series of encounters with individuals who profess to have something to teach Siddhartha, and whose teachings he comes to find inadequate in various ways—the scholarship of the Brahmins that leads to intellectual prowess but not happiness, the asceticism of the samanas that creates a stoic perseverance but nothing more, the art of love from Kamala that never results in a loving spirit, and the mercantile expertise of the merchant Kamaswami that leads only to unsatisfying entanglement in possessions. Through a movement from extreme to extreme, Siddhartha finally comes to the silent, listening Vasudeva, the ferryman. Vasudeva’s expert ability to navigate the opposite banks of the river and all they represent becomes an emblem of the unity of spirit that Siddhartha has sought, and the almost wordless communion between the two leads to the culmination of Siddhartha’s search. As Hesse has told the story, the apparent resolution of opposites that occurs at the end seems to embody a teaching, though perhaps not one that can be easily verbalized apart from the telling of the incidents of the story itself. At the same time, and in the spirit of Siddhartha’s own search, Hesse has raised questions for us about whether words can communicate the deepest truths or can only prepare us to experience them.

In the 1960s, especially in the United States, the novels of Hermann Hesse were widely embraced by young readers who found in his protagonists a reflection of their own search for meaning in a troubled world. Hesse’s rich allusions to world mythologies, especially those of Asia, and his persistent theme of the individual striving for integrity in opposition to received opinions and mass culture appealed to a generation in upheaval and in search of renewed values.

Born in southern Germany in 1877, Hesse came from a family of missionaries, scholars, and writers with strong ties to India. This early exposure to the philosophies and religions of Asia—filtered and interpreted by thinkers thoroughly steeped in the intellectual traditions and currents of modern Europe—provided Hesse with some of the most pervasive elements in his short stories and novels, especially Siddhartha (1922) and Journey to the East (1932).

Hesse concentrated on writing poetry as a young man, but his first successful book was a novel, Peter Camenzind (1904). The income it brought permitted him to settle with his wife in rural Switzerland and write full-time. By the start of World War I in 1914, Hesse had produced several more novels and had begun to write the considerable number of book reviews and articles that made him a strong influence on the literary culture of his time.

During the war, Hesse was actively involved in relief efforts. Depression, criticism for his pacifist views, and a series of personal crises—combined with what he referred to as the “war psychosis” of his times—led Hesse to undergo psychoanalysis with J. B. Lang, a student of Carl Jung. Out of these years came Demian (1919), a novel whose main character is torn between the orderliness of bourgeois existence and the turbulent and enticing world of sensual experience. This dichotomy is prominent in Hesse’s subsequent novels, including Siddhartha (1922), Steppenwolf (1927), and Narcissus and Goldmund (1930). Hesse worked on his magnum opus, The Glass Bead Game (1943), for twelve years. This novel was specifically cited when he was awarded the Nobel Prize for Literature in 1946. Hesse died at his home in Switzerland in 1962.

Calling his life a series of “crises and new beginnings,” Hesse clearly saw his writing as a direct reflection of his personal development and his protagonists as representing stages in his own evolution. In the 1950s, Hesse described the dominant theme of his work: “From Camenzind to Steppenwolf and Josef Knecht [protagonist of The Glass Bead Game], they can all be interpreted as a defense (sometimes also as an SOS) of the personality, of the individual self.”

The Bhagavad Gita (first or second century CE)
This central text of Hinduism is a lively dialogue between the warrior Arjuna and Krishna concerning the various ways in which humans can live a life of integrity and achieve insight into the meaning of existence.

The Dhammapada (third century BCE)
One of the oldest and best-known Buddhist texts, this collection of striking aphorisms delineates a complex moral system, the goal of which is enlightened living and liberation from suffering.

Ralph Waldo Emerson, The Oversoul (1841)
This essay on the universal spirit permeating all existence is imbued with Hindu and Buddhist thought, filtered through the self-reliant spirit of American transcendentalist philosophy.

Johann Wolfgang von Goethe, The Sorrows of Young Werther (1774)
This epistolary novel follows the dispiriting and ultimately suicidal effect of the title character’s search for absolute spiritual truth and love.

Janwillem van de Wettering, Empty Mirror: Experiences in a Japanese Zen Monastery (1973)
A well-known Dutch mystery writer describes with wry humor his serious attempts to learn and refine his spiritual practices under the direction of an enigmatic, cantankerous Zen master.

Learn More About Siddhartha
print
Back to Top